Please notice! The board of the Scandinavian Ragdoll Club (SRC) does not have any knowledge in veterinary medicine and does not have any veterinarians in cooperation with us. Although, we do consider it our responsibility to gather and distribute the information we are able to get through our various channels, to reach as many breeders as possible.

In the spring of 2016 it was revealed that a defect is present in our breed, which leads to that in some litters kittens with dwarfism are born. All affected kittens share a very similar appearance. Another thing the kittens have in common is that they all have one special ancestor in their pedigree on both mothers and fathers linage. Today we know about around 40 affected kittens, but our guess is that there are many more that we have not been told about. These dwarf kittens have been born in both Sweden and in other countries.

That this problem is arising in this scale at just this moment is no mystery. It is now that breeders have started to breed litters with these lines on both parents side without getting too high inbreeding coefficient. At first the cats seems to be unrelated, but if you look further back than 4  generations (in Pawpeds or FindUs for example) we can easily see the relations. The sad thing is that it’s in very popular and common breeding lines these potential defect carriers can be found. Our opinion is that a lot of cats can be involved in this problem, and probably this might just be the tip of an iceberg. If breeders don’t spread the word about this and plan their litters and sales carefully, we drastically risk increasing the number of born dwarf kittens within the years to come

A typical trait for a dwarf kitten is that it’s often smaller than its siblings. They have short legs, a short broad body, a very short tail, small forward tilted ears, a broad head with a short nose and very dark blue eyes. Many of the kittens have had very small paws and underdeveloped hind legs. The short body and legs, along with the slow movements of the kitten, contributes to a very distinctive way of walking.

The development of a dwarf

The kittens SRC have knowledge about have all had normal weights at birth. At 2 weeks of age, the breeder can begin to see a reduction in weight gain compared to the siblings. You can also see that the kitten is not as energetic as the others. At 4-5 weeks old, the differences between the affected kitten and the normal siblings increase gradually, both in weight and appearance. At 7-9 weeks old the differences are very pronounced. After a while the affected kittens get constipated, and this usually results in that the kitten never gets older than 12-16 weeks old.

At this point it seems that the kittens can get a more or less severe form of dwarfism. Some are a bit more functional at first, while others are more affected and die very young. The ones that have a milder form gets to live a bit longer, a lifespan that can be measured in month instead of weeks.

A specific type of dwarfism

Dwarfism exists in all breeds and can have many causes, but the type of dwarfism that have been recognized in the Ragdoll breed the past year is probably a special form, where kittens are affected when they inherit the gene in two copies – known as a recessive gene.

The type of dwarfism that affect our Ragdolls today does not give any indication on blood works when measuring levels of T4 and TSH. Because of that, some breeders have been sent home from the veterinarians with the incorrect conclusion that the kitten is healthy, despite the distinctive appearance of the kittens. 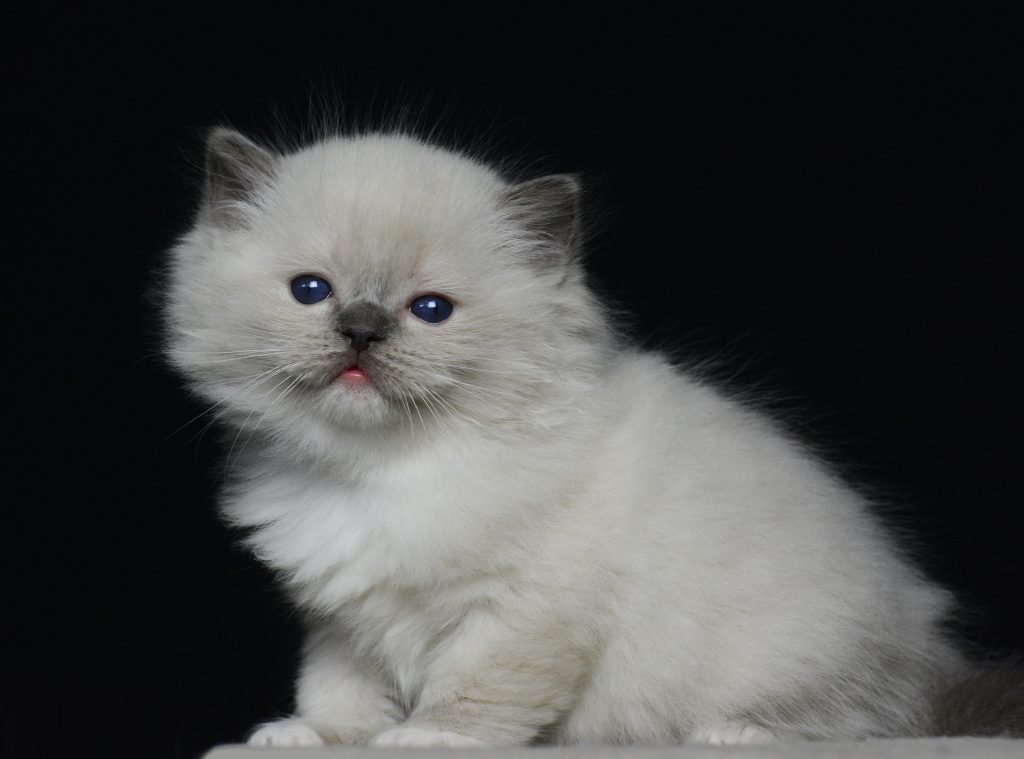 All of the known dwarfs seem to show an autosomal recessive genetic pattern, where one unique cat exists on both mothers and fathers side in all of the pedigrees. That cat is ES*Patriarca Gucci 1. There does not seem to be any connection to high inbreeding, in fact all known pedigrees show a low or very low percentage of inbreeding. Unfortunately in affected kittens, breeders have unknowingly bred two carries with each other. In some of the affected kittens pedigrees, the common ancestor is as far away as 8-9 generations back.

There is a possibility that kittens born with dwarfism may occur in other breeding lines that we not yet have knowledge about. We only know that today we have about 40 affected kittens who all have this cat in both mother and fathers linage. By following the cats in the pedigree back to this ancestor, we can acknowledge a lot of carriers of this defect gene. These breeding lines are used by a lot of breeders, and we believe that at this moment it is best not to duplicate this line when breeding.

So what is really an autosomal recessive gene? Autosomal means that the inheritance not is sex-linked, that is, the defected gene is not placed on the sex chromosomes but another chromosome.
The recessive inheritance means that both parents must carry the gene for a kitten to get affected. Statistically when breeding two carriers with each other, 25% of the kittens will be dwarfs, 25% will be normal and free of the gene, and the last 50% of the kittens will be visually normal but carriers of the gene. Of course, in reality the results may different.

In the summer of 2016, two breeders reached out to SLU (Swedish University of Agricultural Sciences) to get their opinion of the situation that has occurred. They were met with great enthusiasm and interest from the university, and thoughts of how they could use their high-tech equipment to find the defected gene was formed.

For SLU to be able to start Project Dwarfism, an initial 50.000 SEK (approximately 5220 EUR) was needed. This was just a small part of the total cost of the project, but the idea was for SLU to apply for financial support from different research funds to finance the project after start up. Therefore, a collection was made to raise the needed 50.000 SEK during the early fall of 2016. The Scandinavian Ragdoll Club contributed with 25.000 SEK and Ragdollklubben and the Danish Ragdoll Club with 5.000 each. The remaining amount was raised by breeders and other Ragdoll enthusiasts!

The projects goal is to develop a DNA-test for the defected gene. If that is accomplished, breeders will be able to test their cats to make sure no kittens will be born with two copies of the gene. Blood from affected kittens and their parents will be analyzed and, to explain it simple, they will try to find what gene the kittens have in two copies and the parents in one.

Several dwarf kitten have been treated with the drug Levaxin and seem to answer to it in some extent, with increased growth and activity. Otherwise, Levaxin is used to treat Congenital Hypothyroidism which is a disease that also cause dwarfism. Unfortunately most kittens have died before 6 months of age despite being given the drug from a very young age. Therefore it is hard to say if there is any point in treating kittens with Levaxin or not. The kittens that SRC have knowledge about are all still young, and it is impossible to define the long-term prognosis for the affected cats.

The advice of the SRC is;

Do you have any tips?

If you have anonymous tips to give you can send it via our website. All clues are very important in our common search for this defect. We know from experience that sometimes you have information that you do not want to share, due to fear of what others might say about you. If you leave information in our tip form, we are not able to track where this information have come from. If you want to, you can of course leave your contact information and name of the cats, but it is not required.

All information is of value – everything from symptoms, development, tests, veterinary statements, pictures and so on. The idea is that we with the help of received information may keep a health seminar in an anonymous form in the future.

Link to gallery with pictures and movies >